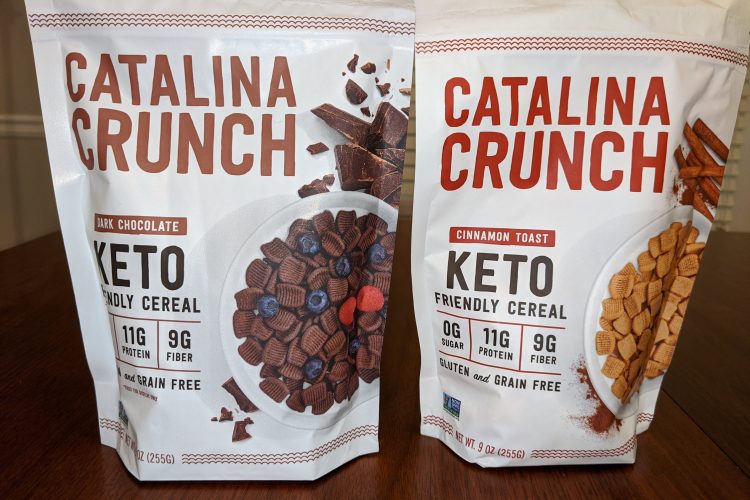 I love cereal. Like many people, I grew up eating cereal for breakfast. My grandfather worked for a cereal company for 35 years, and he got to take home huge pallets of expired cereal every month. Every time we would visit, we would have big bowls of cereal and fight over the toy inside the box. So it’s safe to say: cereal is in my blood. Once I started switching to a lower carb diet, I really wanted something to satisfy that milky, crunchy gap in my diet. I found a few keto cereals, but they all included dairy, and dairy doesn’t really agree with me. After a few months of searching on and off, I finally found Catalina Crunch. It has no gluten, no dairy, and very few carbs. Plus, it’s vegan! Catalina Crunch’s Cinnamon Toast flavor appears to be imitating one of my favorite breakfast cereals, Cinnamon Toast Crunch. The shape of the cereal pieces closely resembles the shape of the cinnamon toast pieces, and the cinnamon flavor is reminiscent of its namesake. I also caught a bit of a maple flavor, which reminded me of French toast doused in syrup. It was very crunchy, which I love, and it really took care of the carb craving that I had. While I was eating it, I really enjoyed it, but I did notice a bit of a bitter aftertaste that had me reaching for some diet soda as a chaser. The label of the Dark Chocolate Catalina Crunch didn’t make it clear which cereal it was imitating, but as soon as I took a bite, I tasted Cocoa Puffs. That rich cocoa taste filled my mouth, and I almost forgot it was a keto cereal. Much like the Cinnamon Toast flavor, it had that satisfying crunch of a good breakfast cereal. This flavor has a bit of an aftertaste as well, but I felt like the cocoa flavoring covered up the artificial flavoring much better. The Dark Chocolate flavoring was a much richer, stronger flavor. It paired nicely with some creamy almond milk. I almost didn’t try the Maple Waffle flavor, but I found it in the snack aisle of my local Publix while I was picking up some vegan ice cream. This one reminds me a little of Waffle Crunch, except with an artificial aftertaste. (Side note — does anyone remember Waffle Crunch? It was my favorite breakfast cereal, and I was devastated when they discontinued it.) It has a strong maple flavor, but I found it to be more bitter than the other two varieties. I enjoyed this one more with milk, as the subtle sweetness of the almond milk balanced out the bitterness of the artificial maple flavor. Still, I didn’t find it to be very enjoyable. This was definitely my least favorite of the 3 flavors.

With milk or without?

I’m a traditionalist, so I prefer my cereal with milk. I like to eat it in a small bowl, and pour just enough milk that each bite is lightly coated, but not enough that it’s soggy. I know some people love to eat soggy cereal and drink the milk that’s left behind, so if that’s your thing, go for it! Catalina Crunch is very crunchy, so it actually might be good slightly soggy. I think the Cinnamon Toast flavor shined more when eaten plain, but the Dark Chocolate was flavorful enough to be eaten with milk, and the Maple Waffle flavor had a bit of a bitter taste that the almond milk helped mask.

It’s no comparison to real, carb-laden breakfast cereals, but I don’t think any keto cereal will be. I did find the artificial sweetener taste to be a bit strong. That’s my only real complaint with the cereal, but it’s an important one. I felt like the chocolate flavor covered up the artificial sweetener better than the cinnamon and maple waffle flavors. I would love to see a stronger cinnamon flavor for the Catalina Crunch Cinnamon Toast. It was a bit bland, especially when mixed with almond milk. It seemed to water down the taste slightly. Where can I buy it?

You can order Catalina Crunch on Amazon. The different flavors fluctuate in price a bit, but right now my favorite flavor, Dark Chocolate, is available for $9.99. Or, if it’s offered in your area, you can shop Whole Foods through Amazon and get it for $8.99 each. The catch is that you have to make a purchase of at least $35 to get free delivery. But the best place to get it, if you can find it, is at Publix. I purchased the first 2 flavors for $8.99 when doing a grocery order from Whole Foods with Prime delivery, then a couple weeks later, I came across the cereal at Publix for $6.83, over $2 cheaper than online.

It’s a bit pricey, at $1 an ounce (or $0.75 per ounce if you get it at Publix). It’s not totally out of line with the pricing of other specialty keto foods, but it will run you a solid $1-2 a bowl. I consider it an occasional treat when I’m struggling with my diet and can’t force down another pork rind. Food is one of my splurges, and I don’t mind paying extra for something that I know I’m going to enjoy and will help me stick to my diet. I don’t think this is going to be in my regular grocery rotation, but when I’m feeling adventurous and tired of eating the same foods day after day, I’m definitely going to check out some of the other flavors.

If you’re looking for other keto snack ideas, check out my dairy-free keto Trader Joe’s haul.

As an Amazon Affiliate I earn commissions from qualifying purchases. This post may contain affiliate links. I may receive a small commission at no cost to you when you make a purchase using these links. Follow my blog with Bloglovin