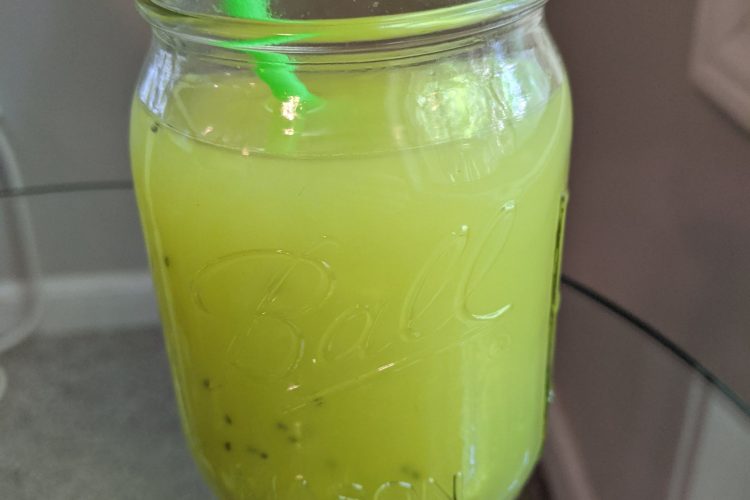 Like many of you, I’m addicted to Starbucks. I especially love their line of colorful Refreshers drinks blended with coconut milk. For example, the Pink Drink, Violet Drink, and most recently, Star Drink (aka Green Drink). Nothing makes me feel better on a day that I’m dragging than getting that little dose of caffeine in such a pretty package. I swear the bright colors make me feel happier and more energetic. Growing up, one of my relatives had a star fruit tree in their backyard, and every time I visited, I would pick the fruit right off the tree and bite into it, letting the juice run down my chin. So once Starbucks introduced the Star Drink, I had to try it. With the first sip, I was in love. It’s sweet, tangy, and citrus-y. This drink brought back some of that nostalgia of running around, catching lizards and eating star fruits.

I have seen those copycat recipes for the Pink Drink floating around, and I love that there’s another way to get your yummy caffeine fix without spending $5 every day. I looked around for the same thing for the Star Drink, and came up empty. Maybe it’s because it’s so new, or maybe it’s because star fruit and kiwi aren’t common tea flavors, but no one had yet made a copycat recipe for the drink.

Creating my own Star Drink

So I set out to create one. It couldn’t be that hard, right? The Pink Drink copycat is just 3 ingredients — passionfruit tea, vanilla sugarfree syrup, and heavy cream. All I needed to do was find a kiwi starfruit tea and mix in some cream and syrup. That’s where my first problem began. I couldn’t find a place to buy kiwi star fruit tea. So I started researching alternatives. Apparently, star fruit is sometimes described as tasting like pears (although more sour). That’s when I came across Republic of Tea’s kiwi pear tea (they actually have a bunch of delicious-looking flavors). My next problem began when I tried adding in the sugarfree vanilla syrup I had purchased to make my own Pink Drink. I added it to the tea and took a sip, then grimaced in disgust. I probably should have anticipated that. Vanilla doesn’t pair well with citrus flavors. I had to start the search for an unflavored sugarfree syrup, which was surprisingly hard to find. The only place I found that I could buy it was here.

I tried that blend, and it was closer, but the flavor wasn’t strong enough. How could I get more kiwi flavor into the drink? I started researching dehydrated kiwi and kiwi powder, but it was pretty expensive and there were a ton of carbs in dried kiwis. That’s when I realized that sometimes the simplest solution is the best — add fresh kiwi. I bought a kiwi, peeled it, and crushed it up in a ziploc bag. I’ll be honest, this part was pretty fun. It was a bit like playing with Play-Doh or slime as a kid. We can’t let kids have all the fun! At this point, it was almost there, but it wasn’t quite tangy enough. What’s tangy and citrus-y that I have on-hand at all times? Lime juice! I squirted some into the glass, and took another sip. Yes, that’s it! Finally, I had that summery, tangy-sweet flavor that I was going for. A little splash of almond milk for some creaminess, and we’re in business.

Check out my recipe below, and let me know what you think! Are there any tweaks I should make to capture that perfect summery goodness? Summer may be ending, but that doesn’t mean we can’t still enjoy the taste of summer.

This recipe is a great way to start saving money and eating healthier. It contains no added sugars and only 4 net carbs, all of which come from the kiwi. By the way, if you’re trying to reduce your carbs, you should check out my list of the best keto snacks. 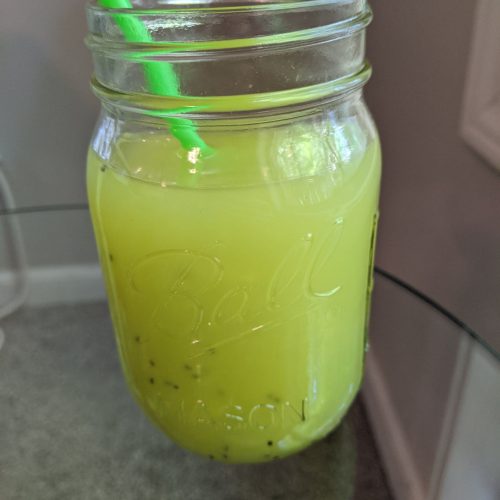 As an Amazon Affiliate I earn commissions from qualifying purchases. This post may contain affiliate links. I may receive a small commission at no cost to you when you make a purchase using these links. Follow my blog with Bloglovin